New IKU Board of Directors 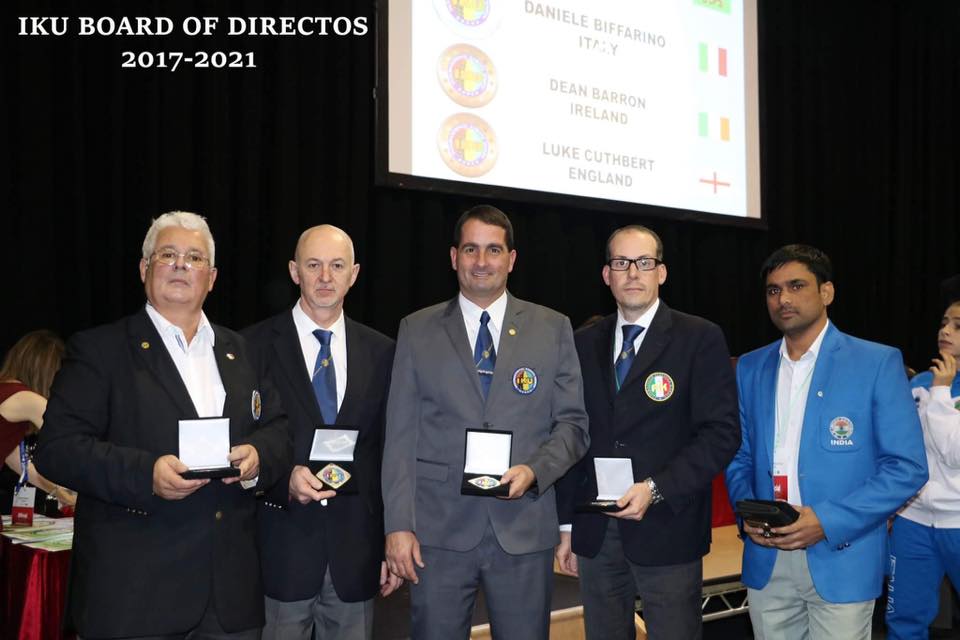 ELECTION OF THE NEW BOARD OF DIRECTORS AND IKU WORLD CHAMPIONSHIP

During the event the representatives from  different countries elected the new IKU President as well as the four members of the Board of Directors who will remain in office for four years (2017/2021).

The competition was a great success, the most important in IKU history: 27 nations (not federations), almost 1200 actual athletes not only from all over Europe, but also from America, Africa and Asia, gave the event the feature of a “true” world championship, dimension often lacking in other organizations.

The sport hall at Cillin Hill Hub adequately and tidily hosted the thousands of athletes together with referees, masters, managers and relatives. The competition, perfectly managed by the Irish Federation represented by its President Mr. Pat Whelan and its untiring Secretary Mrs. Sheila Hefferman, was carried out on five tatamis without any accident, thanks to the improved refereeing level.

In the evening of October 18th, the delegates elected the new President in the person of the Brazilian Master Gilles Willemin, a real gentleman. A hearty applause showed the general appreciation for the new leader.  Following the election, Mr. Riccardo Mosco (Italy) and Mr. Sergey Rostovtsev (Russia) have been appointed as Vice Presidents; Mr. Mihai Cioroianu (Romania) and Mr. BK. Bharat (India) as Members of Board. Moreover, Mr. Riccardo Mosco was appointed to hold the very delicated task of IKU General Secretary.

Now, after the hard times that came out of the death, of the former General Secretary,  Daniele Lazzarini, when IKU remained without any leadership, the organization has recompacted and thanks to a well defined development project, we restart with an ambitious and innovative work that, we trust, will bring great results in the field of the international Karate.