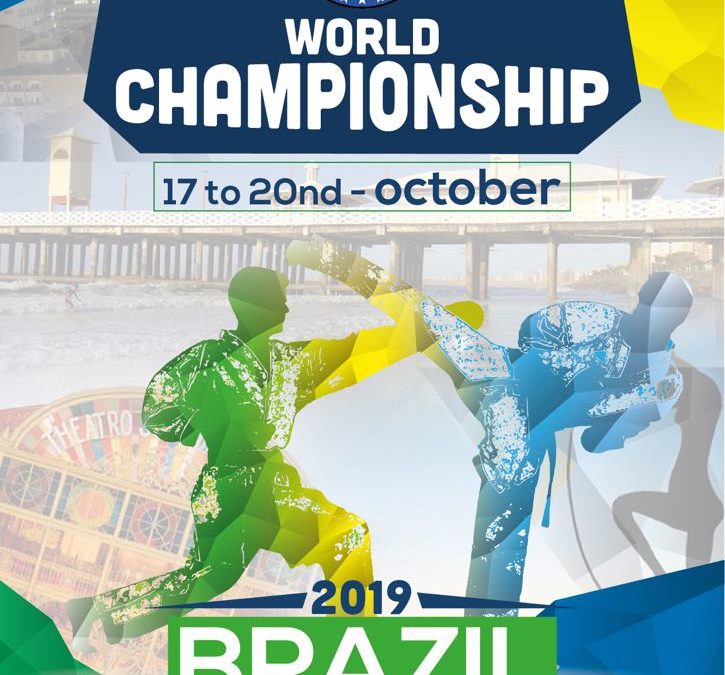 Without fear of denials and according to all the delegates present in Brazil, this edition of Karate World Championships, held on 16/17/18/19/20 October 2019, was the most impressive and best organized since the birth of the IKU (International Karate Union). … “Fantastic !! “… .. this was, synthetically, the most heard comment at the Sports hall “Paulo Sarasate” in Fortaleza.

First of all there was an unprecedented participation in any official IKU championship; 1912 registrations (including kata / kumite / teams) from 30 countries; a record!!

The event was masterfully organized by Sensei Danilo Soares Lima Fihlo, owner of one of the most important gyms in the capital of the Caera, under the patronage of the Prefecture of the State of Caera: the competition was smoothly carried out in a festive and friendly atmosphere which constantly characterize IKU events.

The referees were the real heroes of the championship and worked incessantly on the five competition areas for several hours a day. The Technical Commission with its President Dr. Stefano Pucci (Italy) and the Referee Commission with its President Prof. Adrian Nagel (Romania) explained with videos and live matches, the new competition rules adopted by IKU that completely revolutionize the concept of priority in Sanbon kumite; the new rules of Shobu Ippon, which will come into force from 01 January 2020, have also been definitively approved.

The refereeing problem is a central issue in IKU karate: it is not acceptable that several federations do not even bring a referee to an official competition like a World Championship !!! This lack contributed to the only negative point of the entire championship as, on the evening of Saturday 19 October, the kumite seniors competitions went on until midnight !!

Going back to the referees, the following were promoted to the category of:

But let’s get back to the competition and its main actors, the athletes. All the categories were very crowded with peaks of 78 competitors (kata shotokan women), 54 athletes (kata junior shotokan), 49 competitors (kumite sanbon + 80 kg. senior males) !! But the record of the records in every federation and every time was, without a doubt, Shotokan / Male Seniores category which counted 159 athletes divided over 4 pools !!

“In my long career in the world of karate – Dr. Stefano Pucci comments – which began 51 years ago, in all existing world organizations, I have never seen any single category with …. 159 competitors … !!! If someone can deny it, I wait for him, but … I don’t think this will happen !!!”.

Another remark to be made, concerns the very high technical level in almost all the categories, in some of which the competitors had to face and win 6/7 matches or elimination rounds, in order to win !!! And winning was certainly not easy, as some international champions could remark and who didn’t win in this world championship…!!

Italian, English, Czech, Romanian, Argentinian, Chilean and US athletes fought like lions, but the capability shown by the hosts was truly remarkable. The Brazilians, in front of their festive audience and their televisions, wanted to win and so it was; in the final ranking first Brazil, second Italy and third England, closely followed by the strong Czech Republic and Romania !!

A special remark: among the dozens of categories present there has been the fantastic proof of the athletes with handicaps, which particularly fills the IKU leadership with pride. In Fortaleza, for the first time in the history of IKU, the World Championship was also held for differently able athletes; directed by the worldwide responsible of this delicate sector, the Argentinean teacher Marina Regules, as many as 21 athletes divided into three different motor disabilities, have given life to a competition that has excited referees, coaches and the audience present.

A special thanks to the “great” Marina, a strong champion in the past and a wonderful teacher today.

A special praise has to be addressed to the two main architects of this beautiful IKU World Championship that has shown, in an indisputable way, the enormous numerical, organizational and qualitative “growth” that IKU is registering more and more in the world of international karate !!! The two great managers, IKU true pride, are the World President Gilles Willemin (Bra) and the General Secretary Riccardo Mosco (Ita) tireless and true engines before, during and after … this great success !!!

The congress also unanimously approved the upcoming IKU World Championships to be held in October 2021 in the beautiful city of Venice / Italy.

On this occasion the new IKU Board will be elected which, according to IKU Statute, will lead the IKU (in full international ascent) for the four-year period 2021/2025.