Mihai Cioroianu, elected member of the International IKU Board, has left us 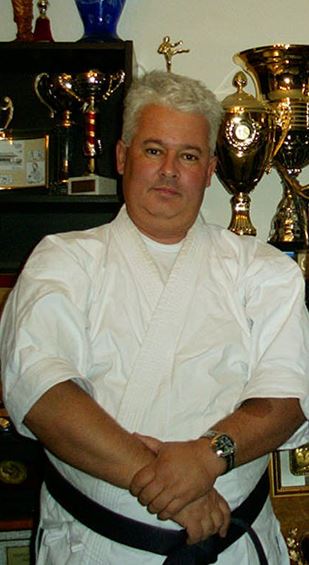 My great friend Mihai Cioroianu, died this morning (11 th November 2020) in his home in Timisoara .
Civil engineer , born in 1955 , married since 1986 with the kind lady Mariana and with a son now a man, he was the President of the Romanian karate federation EU.RE.KA and a member of the international board of IKU.
Mihai Cioroianu , black belt 8° dan , one of the best know and esteemed master of world karate was one of the pioneers of karate in Romania , training in secret since the period of the communist dictatorship , when Ciausescu had forbidden the practice of karate in that country.
Many of the managers, referees , technicians and excellent athletes who currently play in the various Romanian karate organizations have been trained by him in the past .
Cultured person , fluent in Italian , French, German and above all English ; “smart” and concrete man , he had known how to make everyone esteem himself in the world of martial arts.
I was his friend ; I had met him almost 40 years ago in Rome when he , at the invitation of then president of FITAK , attended and graduated as an Instructor at the “Scuola dello Sport” of Acquacetosa / Italian Olimpic Committee in Rome. From that moment we shared many events, especially in the international field , in karate but also in common life , including the foundation on January 19, 2013, of the IKU (International Karate Union) which saw him among the founding-members in Venice together with Daniele Lazzarini, Spartaco Bertoletti and myself for Italy , with Victor Charles and Abdul Shaher (England ) , Gilles Willemin arrived from Brasil , with Sergey Rostovtev from Russia .
Elected in 2017 in Kilkenny/Ireland in the international board , together with his collaborator Andrei Tripa has organized the next European Championships , scheduled from 28/30 October 2021 , in the beautiful city of Oradea.
Dismayed by the pain the colleagues of the IKU board , the IKU President Gilles Willemin , the General Secretary Riccardo Mosco and my personal ,send you a strong hug dear friend Mihai and may …. the earth be light to you !!