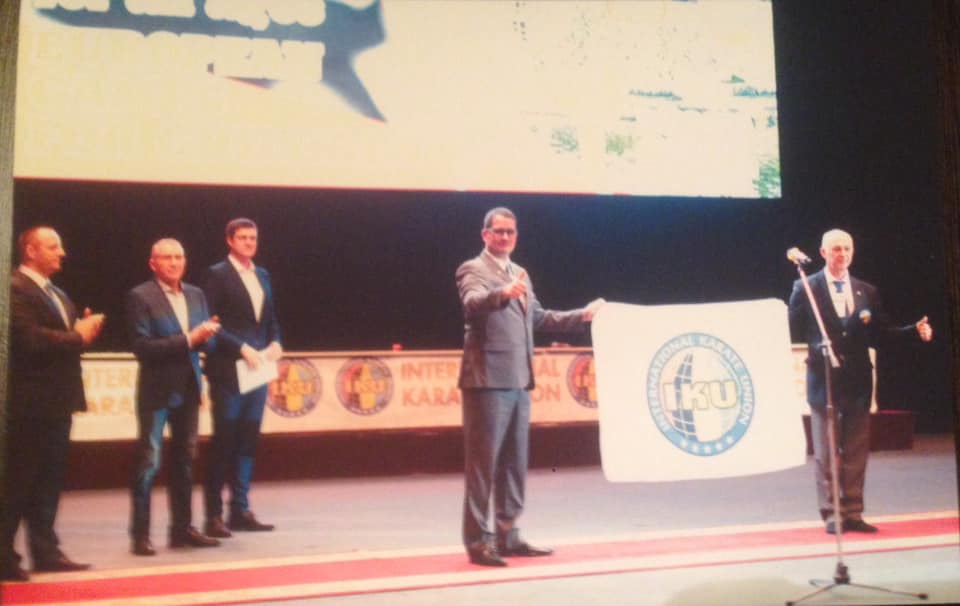 From 17 to 22 October 2018, the functional Complex Grinn of Orel / Russia hosted the 3rd edition of the IKU European Championships in an optimal way, confirming the goodness of the project of this dynamic karate federation in constant “ascent” in the international panorama of “martial” arts.

Orel is a new and modern city (about 400.000 inhabitants) about 350 km. from Moscow; completely destroyed by fierce battles during the Second World War, it has recently been rebuilt following modern urban criteria while retaining architectural features typical of the Russian tradition.

The organization was carried out by the excellent and efficient “landlord” Sergey Rostovtsev (President of the Russian Karate-do Union) and the work has perfectly integrated with the suggestions of Riccardo Mosco (IKU General Secretary); 4 competition areas, respected times, few coaches around the tatami, honest judgments … everything, therefore, as it should be in an international competition of sport karate worthy of this definition!!

The Grinn tourist complex encloses three 5-star hotels, two pools, six restaurants, cinemas, shops, a bank, a well-equipped wellness center, a large shopping center and a sports complex with 4 tennis courts, three gyms and a sport hall with 800 seats …. a “wonder” especially if, all concentrated only 50 meters from the main hotel.

All the IKU Board was present at this important event: the world president Gilles Willemin specially arrived from Brazil for this purpose, the General Secretary Riccardo Mosco (Italy), the board member Mihai Cioroianu (Romania) and the vice president Sergey Rostovtsev (Russia) the latter also in his role as organizer of the event. The other board member, the Indian master BK Bharat (who will organize the IKU Asian Championships in New Delhi in mid-November) has sent a message of good wishes for the “success” of the European continental event.

“When we assigned the European Championship to Russia – commented General Secretary Riccardo Mosco – we were aware of the difficulties that many nations would have encountered (visas, air connections, distances between cities on the vast Russian territory, considerable costs, etc … ), but our “strategy” to expand our presence also to the Eastern Europe has determined our choice and I must say that, in the end, we have reached our political objective. “

“On the other hand,” concludes Mosco, “when a federation wants to define itself international, it must also go to distant countries and perhaps less economically “cheap” … but the primary purpose of IKU is to have the largest number of member countries (and a federation for each country …) on all continents. “

1,200 athletes from 17 countries … on Russian soil … are a more than satisfying result that has comforted the IKU Board, who is already preparing the 2019 World Championships in Fortaleza in Brazil: … .. in Brazil, in fact, and not in the “usual”, close, quiet, and cheap Western Europe !!!

Great work was done by the Secretary Riccardo Mosco who worked incessantly as “director” of the entire event, not only intervening and re-modifying some critical situations, but also doing innumerable “bilateral” meetings (with individual Presidents of the member federations) and also in the extended meetings in which the IKU karate organizational and political-territorial future has been planned.

After the beautiful video presentation of the city of Novigrad made by the President of CSK, the next 2020 European Championship was awarded to Croatia; the meeting with the WKC Vice-President, the Russian Timoviev Viacheslav arrived from almost 800 km was particularly important, he discussed with the IKU Board on a future collaboration between WKC and IKU and it has been agreed the participation in the 2020 European Championships in Croatia, of the federations that adhere to both international bodies.

The objectives are planned and implemented and the results are slowly … coming !!

Also indefatigable is the work that the Technical Director Stefano Pucci is doing. For years now, he has been traveling all over the world in many countries spreading and explaining “de visu” as a wandering “ambassador”… the goodness of the IKU project; his knowledge, his personal friendships, his knowledge of three languages ​​and, above all, his great willingness to overshadow his personal interests (family and his gym) for the “cause” of the International Karate Union, are giving the desired results.

“In this occasion in Russia – comments Pucci – I have had dozens of bilateral ” preliminary” talks: in particular with representatives from Arzebajan, Kyrgykstan and the delegate from Lithuania. All those have already invited me to go to their countries on the occasion of the their national championships.”
The level of the referee class, under the expert guidance of the Commission led by Professor Adrian Nagel (Romania) is constantly improving and the “old” rules dating back to 38 years ago, has been used (for the last time); from November 1, the new Competition Rules written by the International Commission and published on the IKU site since March 15th, will enter into force.
The technical level of the athletes was excellent in kata specialty and also in kumite there were really spectacular fights with very well prepared athletes.
It ends so, between parties and toast during the Sayonara Party, this beautiful Championship characterized by a great spirit of friendship between all the representatives from the various federations that, for the IKU Executives, is the real and only important thing!
A final “note”; one imagines Russia as a cold nation where you have to go out with your coat … but it wasn’t! In the 6 days in the land of Pushkin everyone wore his shirt while on the rest of Europe it was quite cold !! How to say …. you “never know” in the climate and … in the international karate too!!!